Tech in a Time of Pandemic and Political Turmoil

This article first appeared in Digital Edge, The Edge Malaysia Weekly, authored by Pathma Subramaniam.
Malaysia has undergone more political instability in the last decade than it did in the early days of its formation 58 years ago.

The continuous arbitrary changes in government — following a contentious 2018 general election — has resulted in an increasingly fractious political process that has thrown the country into one upheaval too many, which have been compounded by the unceasing Covid-19 pandemic.
While political pundits see the situation as a sign of a maturing democracy, the political bloodletting has only exacerbated a weakened economy and resulted in a state lacking in direction. 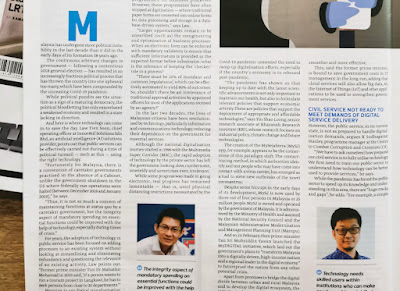 And here is where technology can come in to save the day. Law Tien Soon, Chief Operating Officer at Innov8tif Solutions Sdn Bhd, an artificial intelligence (AI) solutions provider, points out that public services can be effectively carried out during a time of political turmoil — such as this — using the right technology.

“Fortunately for Malaysia, there is a convention of caretaker governments practised in the absence of a Cabinet, unlike the government shutdown in the US where federally run operations were halted [between December 2018 and January 2019],” he says.

“Thus, it is not so much a concern of maintaining functions at status quo by a caretaker government, but the integrity aspect of mandatory spending on essential functions could be improved with the help of technology, especially during times of crisis.”

For years, the adoption of technology in public service has been focused on adding processes to an existing system without looking at streamlining and eliminating redundancy and questioning the relevance of an existing activity, Law points out. “Former prime minister Tun Dr Mahathir Mohamad in 2019 said, ‘If a person wants to run a tourism project in Langkawi, he has to seek permits from close to 20 departments.’”

Meaning to say digital transformation does not necessarily have to involve the latest technology. It merely has to streamline existing processes and make everything more efficient and convenient.

“Many government agencies have embarked on system modernisation programmes for business processes. However, these programmes have often stopped at digitisation — where traditional paper forms are converted into online forms for data processing and storage in a database-driven system,” says Law.

“Larger opportunities remain to be unearthed [such as] the reengineering and optimisation of business processes. When an electronic form can be enforced with mandatory validators to ensure that sufficient information is provided in the expected format before submission, what is the relevance of keeping the ‘checker’ role in a process?

“There must be 20% of mundane and common [regulations], which can be effectively automated to yield 80% of outcomes. So, shouldn’t there be an irrelevance of traditional approval activities by appointed officers for most of the applications received by an agency?”

Email ThisBlogThis!Share to TwitterShare to FacebookShare to Pinterest
Labels: AI, In the News, pandemic, TheEdge